TLDR: I knew Prattle needed media to reach its target audience and gain credibility. I brought on a PR associate, and together we built a massively successful earned media record: Financial Times (multiple), Bloomberg (including a spot of Bloomberg TV), Business Insider, CNBC, The Wall Street Journal, MarketWatch, and Quartz. 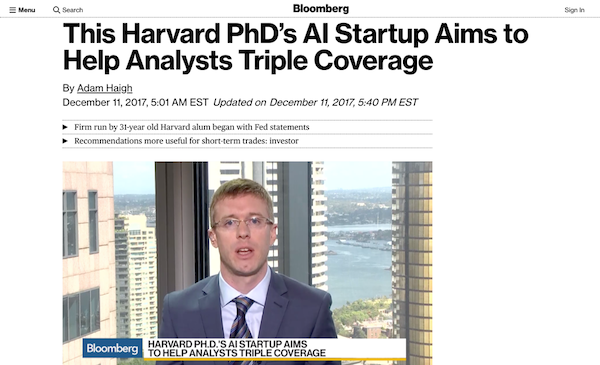 As Prattle’s target market was large asset managers and institutional investors, I decided that PR could play a key role in both lead generation and gaining credibility. Following my suggestion, the founders hired a PR professional for Prattle, Jon Ryan, with whom I worked to earn key media placements for the firm.

Together, Jon & I created Prattle’s story pitches, media relationships, and contributed pieces. We also collaborated with Prattle’s technical leadership, like Director of Quantitative Analytics Joe Sutherland, to come up with clever analytics and story angles.

These placements powered the highest peaks in the history of the company’s web traffic.